Michelle Obama has constantly been seen mimicking the styles of former first ladies. From being reminiscent of Jacqueline Kennedy in her inaugural gown to the likeness of Nancy Reagan in her chic cardigans and preppy casual garments, Mrs. Obama is a follower of the fashion icons before her. However, the one first lady’s style and essence she most embodies is that of Mamie Eisenhower.

Mamie Eisenhower had an outgoing personality and charmed the public while in the White House during the 1950’s and early 60’s. She particularly appealed to the modern housewives, who felt they had something in common with Mamie. She was also one of the first presidents’ wives to bring the First Lady of the United States into the role of a fashion icon, as well as a hostess of the White House and role model for American women. Her well-known “Mamie look” was typified by her one-piece dress with a full circle skirt ending just below the knee. Her dresses usually had material cinched tightly across the waist, just below the bust-line, highlighting her womanly hourglass figure. 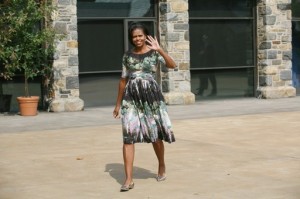 Mamie was fashionable and known for many people copying her style, and like Michelle Obama, Mamie would often mix in costume jewelry with her look. Recently, while at the herb garden, Mrs. Obama was seen wearing a 50’s style Chinoiserie print dress, similar to the style of Mamie Eisenhower. Mamie knew her signature dress would accentuate any woman’s natural curves. If you want to create an hourglass silhouette for yourself, here’s the dress for you!

I love this vintage style, and think every woman should own a dress like this!