Monday night, January 22nd, First Lady Michelle Obama astonished Americans as she stepped out in a Jason Wu design for a second time! For the past few weeks, all the gossip of the fashion world has been over which designer Michelle would choose wear to the Inaugural Ball. No one predicted the first lady would wear the same designer for two consecutive Inaugural balls; however, if there’s one word that describes Mrs. Obama’s style, it’s just that – “unpredictable.”

Michelle Obama looked glamorous, as if bringing back old Hollywood style to the White House. The powerful, ruby red color of the gown was complimented by the elegant airiness and graceful movement brought by in by the chiffon and velvet fabric used in the design. Mrs. Obama completed her look with Jimmy Choo shoes, a a handmade diamond ring by Kimberly McDonald.

It has been reported by a White House official that immediately following the Inauguration festivities, the gown as accessories will be taken immediately to the National Archives.

A first lady can never go wrong in “Reagan Red” – definitely fashionably correct. What do you think of Mrs. Obama’s look? Who did you think she would wear? 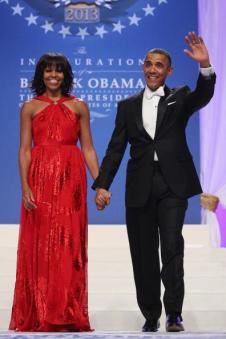 For this special occasion, Michelle chose to wear an elegant, off-the-shoulder, midnight blue gown by Marchesa. She accesorized by adding several thick strands of Tom Binns pearls. Thisevent marks the first time Mrs. Obama has worn Marchesa, a New York-based label, for a major event. The label was started by British born designers Georgina Chapman and Keren Craig in 2004. How fitting for this occasion, no?

Samantha Cameron opted for a dark blue slip gown, covered with a mesh of dark and light blue lace. She embellished her look with a black belt, cinching at the high-waist. What a flattering, avant-garde look for her ruler-silhouette!

Which woman’s gown do you prefer? 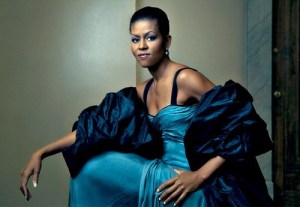 It was reported that First Lady Michelle Obama, along with the Queen of Qatar, closed off part of Madison Ave. last year for a “First Lady Shopping Spree.” The two women allegedly splurged on some sexy lingerie by Agent Provocateur, adding up to about $50 GRAND! The alleged shopping spree was said  to spark a 12% increase in the British label’s sales reports.

Almost immediately after the release of the story, Kristina Schake, director of communications for First Lady Michelle Obama, released a statement saying, “‘This story is 100 per cent false.” For a woman who usually prides herself on shopping at more affordable stores, such as Target, Gap and J.Crew, if this shopping spree were correct, it could cause quite an uproar (if it hasn’t already).

What are your thoughts – Do you think the Mrs. Obama spent $50 grand on lingerie? Is this acceptable behavior for a first lady? Fashionably Correct?

For the original story from the Telegraph, click here. 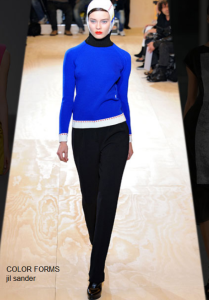 Bright colors have been in the fashion spotlight for a while now, and they are still going strong in one of this season’s hottest fall trends, high contrast color blocks.

Designers mixed electric colors with geometric shapes for this graphic, eye-catching, fall fashion trend. From Mondrian’s plaid shifts to Balencia’s black and white tunic paired with ultraviolet trousers, this season’s runway look is all about color.

This trend is a show-stopper – just remember not to go overboard with this look; color blocks are chic, but accidentally go too far with this trend and you can end up looking like a clown on his way to a birthday party. Choose one color block piece and pair it with a simple and classic solid garment.

Try pairing a high contrast, black and white color block sweater with some skinny jeans or a classic solid blouse with color block trousers. Perhaps if you are feeling a little more daring, try a color block dress with some bright accessories, such as Prada’s geometric print dress paired with electric yellow boots (see below).

Animal Print is Back!

Want to have an upper hand on everyone for this fall’s latest fashion trend? Alber Elbanz of Lanvin predicted the new fall collections would “take all these animal prints out of the jungle and into the city.” His predictions have come true; leopard print is taking over! From multi-textured furs to trendy new accessories, this new animal print is the staple of this fall season.

Remember, animal prints can be flawlessly chic or a fashion disaster depending on how they are worn. Limit yourself to one leopard print garment or accessory in your ensemble. Try pairing a leopard blouse with neutral pants, or add a fashionable animal print scarf or purse to jazz up your outfit. 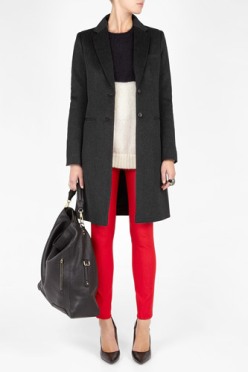 They are everywhere! Oversized, cable knit sweaters are sweeping across the globe as one of this fall’s “must have” pieces. You see some stars wear this piece and look amazing; however, others struggle pulling off the look. Have no fear! Anyone can wear this fashion; you just have to watch the style of sweater you choose. So, how do you wear an oversized sweater?

Remember, we are still women and should show off our curves. Wear your oversized sweater with a pair of skinny jeans or leggings! This look will allow you to look chic in your trendy sweater, while simultaneously showing off your feminine legs.

The one body shape that might have trouble pulling off this look would be the apple shapes, women with larger busts and waistlines, with smaller hips and legs. However, there is a way! Try wearing the oversized sweaters that gather at the end and fit snug at the hip. It is also important for the apple shapes not to invest in cable knit texture. Clean lines are best, and the gathering at the hip will accentuate the small hips and legs. 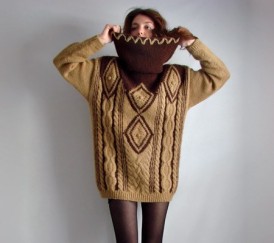 The only “don’t” of oversized sweaters would be to wear one with a baggy pair of jeans. Remember, although this season’s trends may lean toward the masculine look on women, with oversized sweaters and boyfriend blazers, this does not mean we need to actually look like men. We always want to keep that sexy, feminine silhouette!

First Lady in Red: Michelle Obama at the BET Honors 2012

Saturday evening First Lady Michelle Obama attended the BET Honors 2012 in style. At the ceremony, which took place at the Warner Theatre in Washington, DC, Mrs. Obama appeared on stage to pay tribute to Maya Angelou. A distinguished author and poet, Angelou has often been referred to as “America’s most visible black female autobiographer” and is best known for her work I Know Why the Caged Bird Sings.

Michelle looked stunning in a scarlet organza, one-shoulder gown by J. Mendel, a designer recently honored at the National Design Awards at the Smithsonian Museum in DC. With such a dramatic gown, the first lady opted to go light on the accessories, wearing only simple drop earrings.

What do you think of Mrs. Obama’s gown? Is it fashionably correct?

leggings are one of the latest fashion trends! This skinny style of jean has made its way back from the 80’s and is definitely here to stay. Have no fear, denim leggings aren’t uncomfortable and constricting as some may think; these leggings actually have a great stretch, allowing for a close and comfortable fit.

These denim leggings, or “jeggings,” as they are being labeled, are not your average teenagers’ leggings; they can be dressed up or down, worn casually or sported with a more sophisticated look. All this hype about denim leggings leaves only one question – how do you wear them? 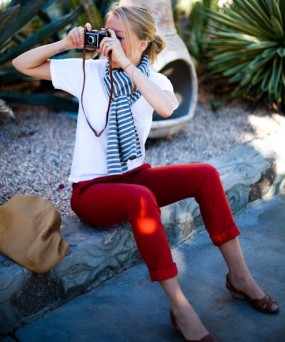 Have fun with you leggings, and don’t be afraid to try something new! A great look with skinny jeans is a button-down shirt paired with a belt cinched in at the smallest part of your waistline. These leggings also look chic paired with some ballet flats and one of this year’s hottest styles, the fitted women’s blazer. When searching for a top to go with your great denim find, remember it is important to keep your blouse slightly loose or layer another blouse or blazer over a tighter fitting top.

Have fun with the new colors of jeggings as well. Keep your look avant-garde with some red jean leggings. However, when wearing bold legging colors, even things out by keeping the top more subtle, such as a simple black or neutral colored blouse.

Sophisticated Style
For a more sophisticated look, stick with the dark wash denim leggings, such as dark blue or even black. It is important to leave the destroyed denim packed with holes, faded washes and patterned jeans out of this look. For this more distinguished fashion approach, pair the leggings with a tunic. Tunics vary in length allowing one to choose the perfect top that falls just over their hips, creating the allusion of a longer torso. Then dress up the jeggings just as you would a pair of dress jeans. Try adding a fitted blazer over a long top, then pair this look with some stylish platform heels.

First Lady Michelle Obama not only met Queen Elizabeth II, but also Kate Middleton, now known as Catherine, Duchess of Cambridge, Tuesday afternoon at Buckingham Palace in London, England. President Obama and the first lady are in the UK for a two day State Visit at the invitation of the queen. 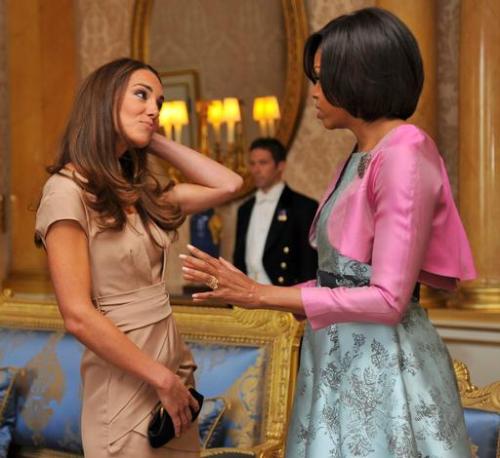 As for Catherine, the duchess wore a Shola Bandage Dress for this first royal appointment, post honeymoon. The beige dress with square neckline and angular cap sleeves is by one of her favorite designers, Reiss.

During their State Visit, the first couple will be attending a state banquet at Buckingham Palace and the president will address both houses of parliament at Westminster Hall.

Three days until the Royal Wedding, and the secrets keep unraveling!

Westminster Abbey will be blanketed in seasonal British flowers and foliage for the royal wedding this Friday. Trees, six English Field Maples and two Hornbeams, will line both sides of the aisle which leads to the altar, while Azaleas, lilacs and wisteria will be spread throughout the abbey. 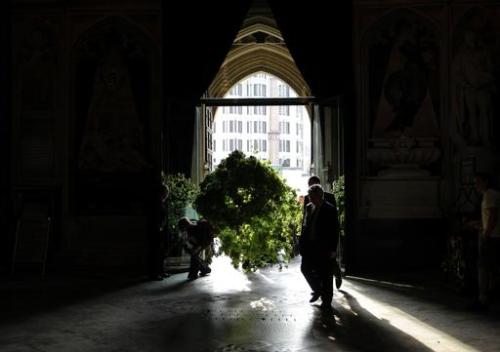 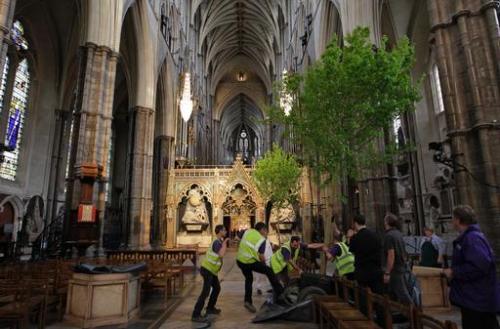 According to Shane Connolly, the Royal Wedding Florist, the symbolism of all the flowers means a great deal to Catherine Middleton. He also described Middleton as being very involved in the floral designs as a “dream client.”

So what do these flowers symbolize?

Much of the greenery will come straight from the royal estate; it was reported that Prince William spoke to the Queen, who was delighted to supply the plants. The majority of the flowers will come from Windsor Great Park.

Assisting Connolly with the flower décor is Emma Sampson, the Middleton family’s florist.

After the wedding, the flowers will remain in Westminster Abbey for the public to view until May 6. At that time, Prince William and Kate have asked that the flowers be removed and donated to charity or replanted.

Although the flowers planned for the decorations have been revealed, it still remains a secret as to what flowers the bride has chosen for her bouquet.

“One of the things that has been very important to Catherine is the meanings of flowers and the language of flowers,” said Connolly. “We’ve tried, especially in the wedding bouquets, to make beautiful stories.”

Perhaps, she will stay with traditional white flowers …what are your predictions?