Happy Hanukkah at the White House 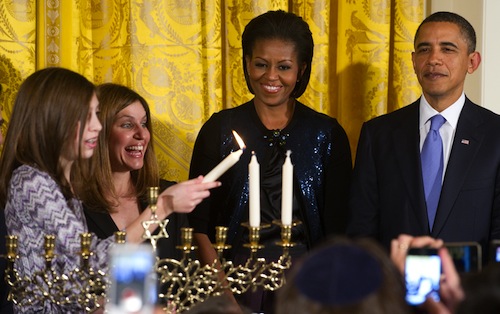 President Obama and First Lady Michelle Obama took part in a Hanukkah celebration in the East Room of the White House last night, the second night of the Jewish festival of lights. The Obamas watched as guests recited prayers and lit the candles of a menorah. The guest list of over five hundred people also included one-third of the Supreme Court. Justices Breyer, Ginsburg and Kagan were all present at this event.

A unique menorah, loaned to the White House by a New Orleans’ congregation, was used for this ceremony. The beautiful menorah was one of a few items to endure Hurricane Katrina; it was restored to be re-lit for Hanukkah.

For this celebration, Mrs. Obama was dressed in a L’Wren Scott cashmere cardigan adorned in blue sequins (available here). She paired this cardigan with a black dress, featuring a full skirt and accessorized by adding a vintage brooch pinned at her shoulder and small, stud earrings.

To get a better look at the dress and hear President Obama’s address, check out the video below!

Former First Lady Nancy Reagan had the privilege of choosing the White House Christmas theme for eight consecutive Christmases. Her first official tree in 1981 was decorated with ornaments lent by the Museum of American Folk Art. However, for each following Christmas, Mrs. Reagan arranged for all the ornaments to be made by the members of Second Genesis, a drug treatment program in Washington, D.C., Maryland, and Virginia.

Foil cones and snowflakes were made in 1982, and then reused the following year for the White House tree, which featured old-fashioned toys, lent by the Margaret Woodbury Strong Museum. In 1984, the tree contained all natural pieces crafted by the Brandywine Museum in Pennsylvania. To complement these pieces, Second Genesis contributed ornaments fashioned out of plant materials.

In 1985 the tree was decorated with 1,500 ornaments made from holiday cards sent to President Reagan the year before. In order for these many ornaments so be made, Second Genesis paired up with the Reagan’s Executive Residence staff. The team was so great together that they worked alongside one another the next three holiday seasons. Together in 1986, they made 15 soft-sculpture nursery rhyme scenes and 100 geese ornaments for Mrs. Reagan’s “Mother Goose” themed Christmas. In 1987, the “Musical” tree was trimmed in miniature instruments, sheet music, and notes. For Nancy’s final “Old-fashioned” Christmas tree of 1988, the White House carpenters created 300 wood candles to hang from the Blue Room tree. In addition to these pieces, Mrs. Reagan added hand-blown glass ornaments from the Eisenhower Administration along with Pat Nixon’s state flower balls of 1969.

What do you think of Nancy’s style motif for the holidays?

This afternoon, at a special White House holiday preview for military members and their family, First Lady Michelle Obama announced the long awaited 2010 White House Christmas theme of “Simple Gifts.” Ever since Jackie Kennedy began the tradition of the White House Christmas theme in 1961, the first ladies have been honored with the privilege of choosing the White House Christmas theme. In her address at this Christmas preview, Michelle stated that she believes this year’s decorations are even more beautiful than those of last year. She also expressed her excitement about the “Simple Gifts” theme, explaining, “The greatest blessings of all are the ones that don’t cost a thing: the time that we spend with our loved ones, the freedoms we enjoy as Americans and the joy we feel from reaching out to those in need.”

Take a look at the video below for a preview of the “Simple Gifts” decorations.

For this event, Michelle chose to wear a sleeveless, navy and gold sheath dress paired with a matching jacket. In my opinion, this year’s Christmas theme is very original, especially compared to many of the first ladies’ often repeated themes, such as “Children” or “The Nutcracker.” Additionally, I think Mrs. Obama’s attire looks lovely! She is starting the holidays off with a bang!

What do you think about the 2010 White House Christmas theme? 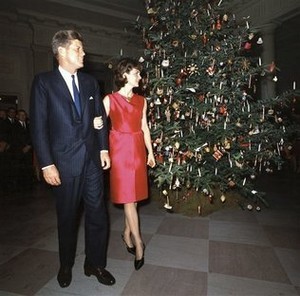 It was not until 1961 that the tradition of a White house Christmas theme began under Jacqueline Kennedy. Jackie, a lover of the arts, started a tradition of having a central theme for the White House Christmas season with her first theme of “The Nutcracker Suite”.

This tree was decorated with ornamental toys, birds, and angels reminiscent of Petr Tchaikovsky’s “Nutcracker Suite” ballet, and placed in the oval Blue Room. The following year, Mrs. Kennedy recycled these delicate pieces, placing them with other ornaments of packages, candy canes and gingerbread cookies on the tree for her second theme, “Children”. All the ornaments were made by disabled or senior citizens craftspeople in the United States. Since this time, the White House has never passed through the Christmas season without a central theme for the house.

In the holiday photo above, Jacqueline Kennedy is seen wearing one of her iconic shift dresses from the 1960’s. This photograph, taken on December 12, 1962 at the White House Staff Christmas Reception, was when Jackie first debuted this deep pink dress, designed by Hubert de Givenchy. This sleeveless dress has a simple front, a classic look for Mrs. Kennedy, but the back of the dress consists of gathered material twisted together, forming a bow. It is now on display at the JFK Presidential Library and Museum in Boston, Massachusetts.

How wonderful it must be to be the First Lady of the United States around Christmas time! She must feel so honored to be in charge of the theme in which all the decorations of the White House are designed around. These decorations and themes are truly a deeper insight to each first lady’s own taste and style, as well as a reflection of their and style!

The White House Christmas tree has been delivered! The Obama family shifted into Christmas gear Friday afternoon as the traditional horse-drawn wagon hauled in an 18 ½ foot Douglas fir, grown on a family’s farm in Lehighton, Pennsylvania. Christopher Botek, the farm owner, brought his wife and two daughters to the White House as he presented this tree to the Obama family. He said he was honored to hand over the tree, caring on tradition, as his parents had presented the official White House Christmas tree from the same farm in 2006 during the George W. Bush administration. As the military band played the Christmas carol “O Christmas Tree,” Michelle Obama, and her two daughters, Sasha and Malia, were outside to receive the tree this year.  Check out the video of the ceremony below.

For this occasion, Malia Obama was dressed in skinny pants, a green blouse and black print blazer. Sasha, on the other hand, wore plaid tights paired with gray shorts, a gray and white striped blouse and black blazer. Do you like this mixture of patterns in Sasha’s outfit?

While her daughters dressed in these trendy fashions, Michelle went for a more classic look. Mrs. Obama was dressed camel trousers and a white, ruffled blouse gold Merino sequin crochet cardigan from J. Crew (available here.) While the 3 Obama women wore drastically different styles, all opted to wear the ever so classic ballet flats with their ensembles.

Do you think a love for fashion runs in the family?